These products are the finest found anywhere. Our line of 160 mg and 320 mg
softgels are from the concentrated extract of Saw Palmetto.

Where does Saw Palmetto Grow?

Saw Palmetto is native to the very South Eastern part of the United States, mainly Florida. Saw Palmetto is also fairly abundant in the state of Georgia and there have been reports of saw palmetto growing in Alabama, Louisana, Mississippi, South Carolina, and Texas to a much lessor degree. Over 95% of all Saw Palmetto Harvested is done South of the Interstate 4 corridor that runs from Tampa to Orlando over to Daytona Beach in FLorida. Saw Palmetto does not grow in China or anywhere else in the world except in this very small area of the very Southeastern US. Floridata informationn Fact sheet Put photo of map where saw palmetto growns here.

How is Saw Palmetto Harvested and Processed?

When the Saw Palmetto berries begin to ripen in late August in Southern Florida, and slowly moves Northward across the state, with the main harvest of ripe berries occuring in September. North of the I-4 Corridor, to the Gainesville, berries may not be ripe until October, and in Georgia not until November. Ripe Saw Palmetto berries will contain 10-15% fatty acids. August and September just happens to be in between vegetable crops and Citrus Fruit Crops in Florida and migrant workers are the main source of labor to manually pick the saw palmetto berries, as no machine exsists to pick the berries. The ripe Saw Palmetto berries are collected and bought to sites that purchase them by the pound from the pickers much as Lilly & Company did in the early 1900's. The Saw Palmetto berries are dried in dryers much like tobacco leaves are. In fact, some companies use tobacco dryers to dry the berries. Once the saw palmetto berries are dried to a moisture content of 5-6% moisture content, they are tumbled over a screen type system, with forced air blowing thru them to remove leaves, and unwanted trash. They can then be put into bags or containers and stored for further processing.

The dried Saw palmetto berries are then processed, and the first step is grinding the berries. If the manufacturer of dietary supplement needs powder for capsules or tablets, it is ground very fine, usually by means of a cyogenic grinder where the saw palmetto berries are frozen to a minus 200 degress fahrenheit or lower and run thru a hammer mill or pulveriser to a very fine powder. The powder can then be sterilized by various means.

If the manufacturer requires the liquid extract, the berries are crushed or ground into small particals to make the extraction process easier. Extraction can be done by using a alcohol solvent, or a super critical fluid such as hexane or carbon dioxide. Today, most saw palmetto extract is produced using super critical carbon dioxide. Carbon dioxide becomes a super critical fluid (air-liquid mixture) when compressed to 79 atm at 31C temperature. When the liquid Carbon Dioxide passes thru the chambers holding the crush saw palmetto berries, the fatty acids and phytosterols are extracted from the raw material and carried away with the liquified carbon dioxide. When the pressure of carbon dioxide is lowered to the point where it becomes a gas again in the holding tanks, the extract is left behind. The carbon dioxide gas is pumped thru the system again to be repressurized and makes the circle again and again. This extract is pure Saw Palmetto extract and then is sent to the lab for testing to ensure it meets various specifications, and total fatty acid content of between 85-95%. Rarely, would a batch not meet specifications unless the berries had been picked too green. It is for this reason, that only mature saw palmetto berries should be harvested.

How is Saw Palmetto Regulated in the US

Saw Palmetto is classified as a dietary supplement in the United States and falls under FDA regulations pursuant to the Dietary supplement Health and Education Act (DSHEA). The act restricts claims that Saw Palmetto can be used to treat, cure, or prevent any disease or condition, because only a drug can legally make such a claim. Nor, can one use clinical studies that suggest Saw Palmetto may aid in the treatment, cure, or prevention of a disease or condition. FDA regulates what claims can be made on a label, and advertising including web sites such as this one. The Federal Trade Commission (FTC) regulates advertising of Saw Palmetto and other dietary supplements in infomercials.

Saw Palmetto Extract is Expensive. It can only be harvested within a two week window when it is ripe, and a storm or lack of immigrant labor, can cause a dimished supply and drive prices up.

So what is Counterfeit or Aldulterated Saw Palmetto?

Let's start with Aldulterated Saw Palmetto, because that is easier to explain. Saw Palmetto is composed of Fatty Acids and Sterols. Each of these fatty acids has a range of what percent is expected to be in Saw Palmetto. Likewise, the Sterols do to. Lets say the range for the fatty acid Lauric acid is 25-32% of the total fatty acids, and a particular lot comes in at 26%. Lauric Acids being a fairly cheap ingredient by itself could be added to bring the lauric acid content up to 32% and still be within the accepted range of Saw Palmetto. Likewise the sterol, beta sitosterol has an acceptable range of .1 - .4% content. If a batch came back at .1%, it could be made to look like superior grade Saw Palmetto Extract by fortiflying the beta Sitosterol content by adding just that ingredient say up to .3% and then charging for a superior product. Adulteration of this style is usually done at the supplier level. Luckily, tests have been devised to detect either of the above scenerios.

The United States pharmacopia developed a testing procedure that if used accurately, can tell if a batch of Saw Palmetto Extract is alduterated or counterfeit. Basically the testing procedure takes the prcentage of Lauric acid and uses that as the root of the equation to determine what the percents of the other fatty acids should be. If they fall outside of acceptable range, it is because the product is adulterated or counterfeit. An example would be that the lauric acid content determined to be 26%. By using the usp chart, then the Palmitic Acid should be about 11%. If it came back at 30% or more, it is Palm Oil. 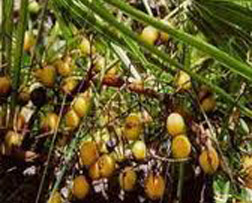 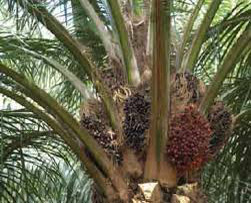 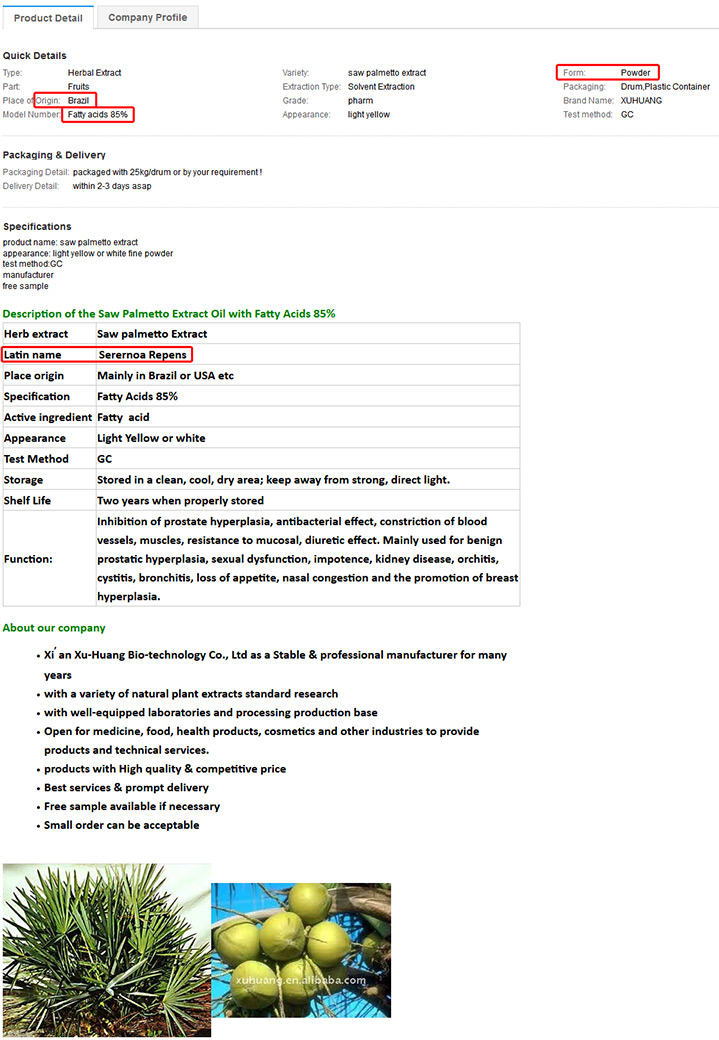 In a article published by the Journal of American Medical Association (JAMA) , it describes the uses of Saw Palmetto, and its effectiveness. After this article was published, two other studies came out that conflicted with these findings. It is not known what the circumstances where that caused these contradcitory findings, but theories exsist. To read the whole article click here.

Saw Palmetto Supplier of Raw Materials and Retail Products to Distributors and Manufacturers of Saw Palmetto and to the general public! 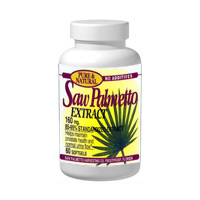 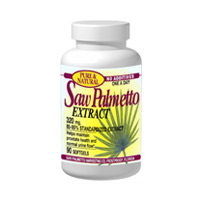 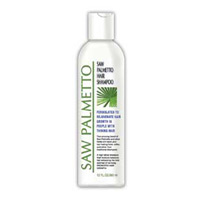 Distributors, Manufacturers, and Resellers, enter your email address to receive updates on availability and pricing of bulk berries, powders, and extracts.